What is sleep apnea, and should you be concerned if you have it?  WebMD defines “Sleep apnea as a serious sleep disorder that occurs when a person’s breathing is interrupted during sleep. People with untreated sleep apnea stop breathing repeatedly during their sleep, sometimes hundreds of times. This means the brain — and the rest of the body — may not get enough oxygen.”The Mayo Clinic defines the main types of sleep apnea, which are:

While we tend to think that only older adults may suffer from sleep apnea, it can actually afflict people at any age – even children. However, the risk factors for sleep apnea are greater for being over age 40, men, overweight men and women, a neck that is 17” or greater for men and 16” or more for women, large tonsils or tongue or a small jaw bone, or those that have any nasal obstructions from sinus issues, allergies, or a deviated septum.

Untreated sleep apnea can lead to the risk of health issues including headaches, high blood pressure, depression, stroke, heart failure and diabetes.What are the symptoms you should be looking out for to see if you or a spouse suffer from sleep apnea? 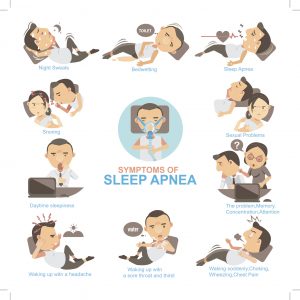 The most common signs and symptoms of obstructive and central sleep apneas include gasping for air during sleep, loud snoring, awakening with a dry mouth, difficulty staying asleep, excessive daytime sleepiness, irritability and difficulty paying attention while awake.  In addition, your partner may report nocturnal episodes where you stop breathing during sleep,

The Mayo Clinic reports that “Loud snoring can indicate a potentially serious problem, but not everyone who has sleep apnea snores. Talk to your doctor if you have signs or symptoms of sleep apnea. Ask your doctor about any sleep problem that leaves you fatigued, sleepy and irritable.”